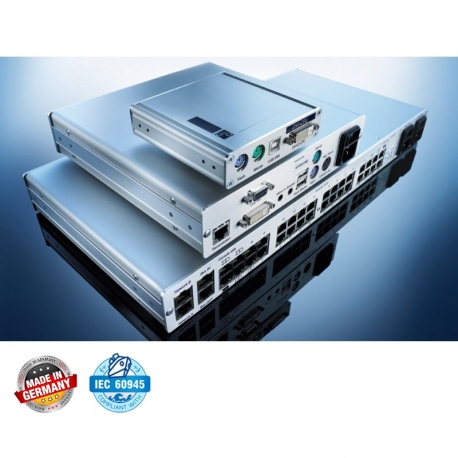 DVICenter KVM matrix switches, you can operate up to 31 computers over up to 31 simultaneous user modules depending on the variant. The up to 32 available ports can be combined as desired.

With DVICenter KVM matrix switches, you can operate up to 31 computers over up to 31 simultaneous user modules depending on the variant. The up to 32 available ports can be combined as desired.

The DVICenter will be replaced by the ControlCenter-Compact. More performance with full compatibility

More information about the ControlCenter-Compact

CrossDisplay-Switching
As a part of the expansion module "TS function", CrossDisplay-Switching enables users to switch between channels simply by moving the mouse. The mouse acts as if on a “virtual desktop” and can be moved seamlessly across the connected displays. Moving the cursor from the active to another display, the keyboardmouse focus automatically switches to the connected computer.

Now users can create an intuitive multi-monitor console and use the mouse to easily switch between channels.

Monitoring & SNMP
The DC-Monitoring feature enables you to detect the system status of G&D devices. The web interface of the particular device provides information that can be sent (SNMP trap) or queried (SNMP GET) as well.

Easier access with SNMP tool Zabbix
For customers who are not yet using extensive SNMP tools, G&D offer a simple way to use the functions included in the devices. Templates for the open source tool Zabbix are provided here. The program lets users monitor SNMP-capable devices in a network and, among other things, issues warning notifications about critical device states, which have been received via SNMP trap.

Dynamic Ports
The dynamic ports of the DVICenter are usable for computer or user modules. The DVICenter identifies automatically if a computer module or console module is connected.

Channel grouping
In addition to combining multiple computers to a console, the DVICenter also supports multi-monitor workstations for computers with several video outputs. Here, multiple channels can easily be combined as channel groups.

As always, you can administrate all functions in the DVICenter web interface. In addition to multiple screens, you can include other signals in these groups. The system also transmits and switches transparent USB2.0 signals as well as RS232.

Stacking function
The stacking function enhances the system’s flexibility even further. The feature increases the number of ports by combining up to ten DVICenter devices via bus port. The ports of the stacked switches are switched in parallel to the master system. Now you can create multi monitor workstations and assign consoles with USB or RS232 channels.

USB-Pinning
If multiple DVICenter ports are grouped as multi-channel configuration, the new USB pinning function enables you to hold the USB transmission on the current computer even when switching to another channel. In this case the USB transmission is not interruped but transmitted to the end.

Thanks to its dynamic ports, the DVICenter can be applied in any applications where many computers are operated over multiple simultaneous consoles.

The system's modular design enables you to adjust the DVICenter's functions to any increasing demands.

The system is applied, e.g., in control centres, OB vans, or studios. 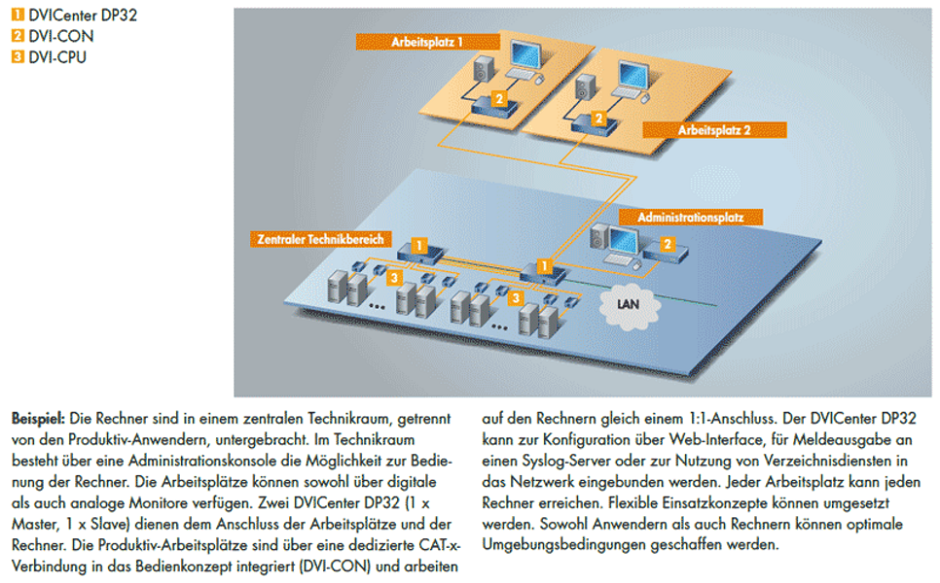 
2 other products in the same category: