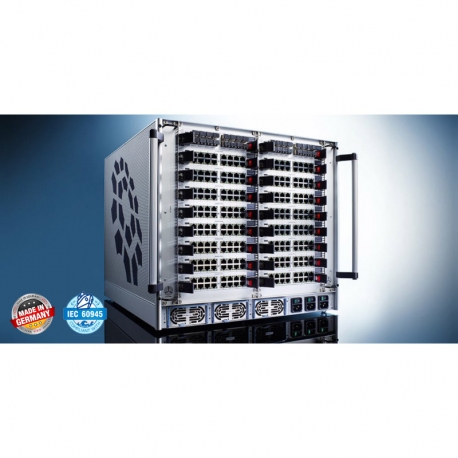 The new ControlCenter-Digital is a KVM matrix switch, which helps you operate multiple computers via multiple consoles. With its modular setup, the new ControlCenter-Digital is highly flexible and ready to  adapt to any surrounding conditions. The matrix switch enables the remote access of large, distributed IT installations in control rooms and is ready for any future IT requirements.

Depending on the chosen variation, the available 288, 160 or 80 dynamic ports can be connected either as computer or as user port. Which type of module is connected is automatically detected by the ControlCenter-Digital.

The following variants of the ControlCenter-Digital are available: 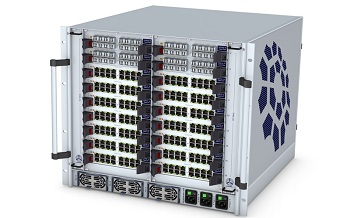 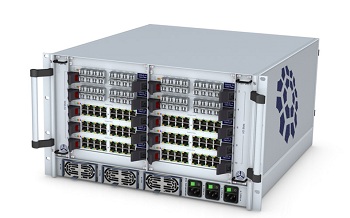 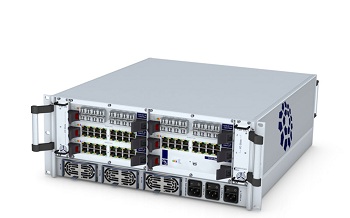 The modular design consists of: 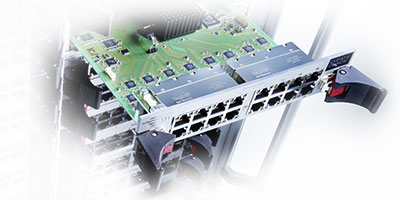 I/O cards
The input/output cards establish a connection between the ControlCenter-Digital and its computer modules and user modules. Each card provides 16 ports, which automatically detect the type of module connected to the matrix switch. The cards run independently from each other – even in mixed mode.

I/O-Card-CAT:
The I/O-Card-CAT offers you 16 RJ45 sockets to connect CAT-x cables. The distance between user modules and computer modules can be up to 140 m.

I/O-Card-Fiber:
Optical fibres are the ideal solution to bridge large distances. The transmission distance can be up to 10 km.

I/O-Card-Trunk4
The I/O Card Trunk4 with ethernet capability, can be placed in one of the I/O  slots of the ControlCenter-Digital matrix system. The I/O-Card-Trunk4 reduces the grid lines required for a matrix grid by combining 4 of the 16 channels on one line.

For transmission between two matrices, the four ports of an I/O-Card-Trunk4 can be configured independently for a 1:1 direct connection. Transmission between two I/O-Card-Trunk is carried by even more powerful components compared to the standard. These components let you use the fourfold of the bandwidth at the same time – thus saving you three quarters of the cabling effort.

I/O-Card-Multi
The I/O-Card-Multi lets you connect third-party devices to the matrix from where they can be switched, too. Some of the signals supported are SDI, HD-SDI, 3G-SDI, USB 3.0 Spectra or 1Gb Ethernet.

The following components are included in shipment: 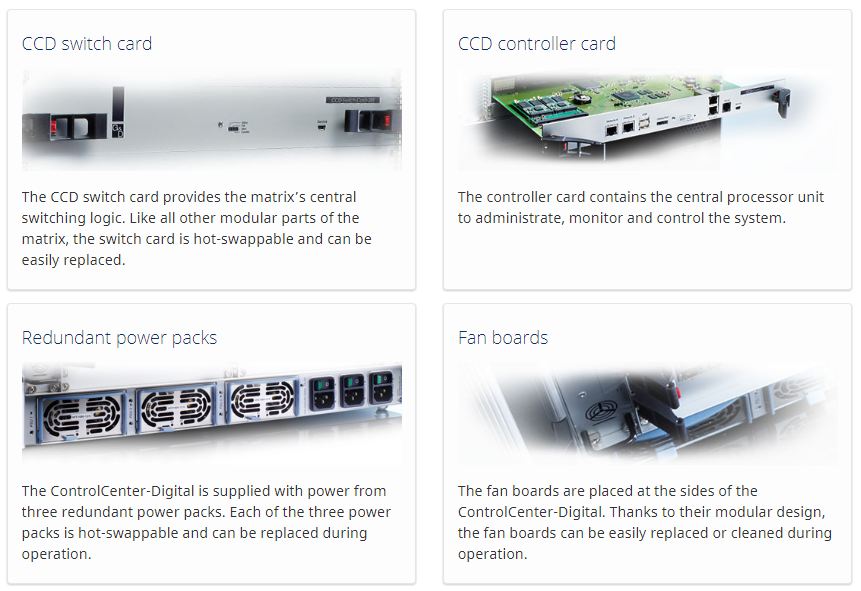 As a part of the expansion module "TS function", CrossDisplay-Switching enables users to switch between channels simply by moving the mouse. The mouse acts as if on a “virtual desktop” and can be moved seamlessly across the connected displays. Moving the cursor from the active to another display, the keyboardmouse focus automatically switches to the connected computer.

Now users can create an intuitive multi-monitor console and use the mouse to easily switch between channels.

In addition to combining multiple computers to a console, the ControlCenter-Digital also supports multi-monitor consoles for computers with several video outputs. Here, multiple channels can easily be combined as port groups.

As always, you can administrate all functions in theControlCenter-Digital web interface. In addition to multiple screens, you can include other signals in these groups. The system also transmits and switches transparent USB2.0 signals as well as RS232.

If several ControlCenter-Digital ports are grouped as a multi-channel configuration,
the USB pinning function enables you to hold the USB transmission on the current computer even when switching to another channel. In this case USB transmission is not interrupted but put on hold.

The CCD-Monitoring feature enables you to detect the system status of G&D devices.
The web interface of the particular device provides information that can be sent (SNMP trap) or queried (SNMP GET).

For customers who are not yet using extensive SNMP tools, G&D offer a simple way to use the functions included in the devices. Templates for the open source tool Zabbix are provided here. The program lets users monitor SNMP-capable devices in a network and, among other things, issues warning notifications about critical device states, which have been received via SNMP trap.

With its modular setup, a broad range of supported signals and transmission media,
the ControlCenter-Digital can be applied in applications like control centres, OB vans or studios.


2 other products in the same category: